Do you like Fireworks? Need a place to go to escape the cold weather? Then let me recommend a place where the sun is hot, breezes are warm, and the ocean waves will ease you into a stress free existence. We are in Coronado, Panama! This is an established well-known beautiful beach community with miles of beautiful black and white sand beaches, about two hours west of Panama City. It is a popular place, as the traffic volume on the Inter American Highway will confirm. People love to escape the city and get to the beach.

We had friends visiting Panama and staying in Coronado who invited us to spend a few days with them over the New Year Holliday. We have been here before but not during the New Year’s celebrations.

We came out a few days before the holiday to miss out on the huge traffic jam that occur when Panama City evacuates for a holiday weekend. Traffic from the City on the Inter American Highway was still heavy on New Year’s Eve, running bumper to bumper for miles from the City. It began to ease around 10PM.

Panamanians love their Fireworks! They are legal here and are used on every possible occasion. Weddings, birthdays, graduations, and any other conceivable occasion are all excuses to load up on Fireworks and set them off for everyone in the vicinity to see. 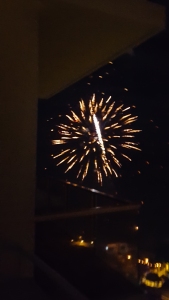 We are here on New Year’s Eve! Fireworks began around dusk with short bursts of pyrotechnics from various parts of the town. It was like they were unable to wait for the New Year, or maybe they were just testing them to be sure they could let them off properly. Not knowing exactly what to expect, we thought that this might be the way it was done here. Not terribly impressive! 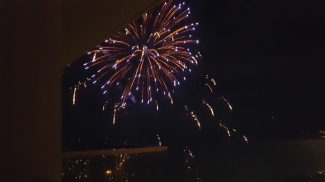 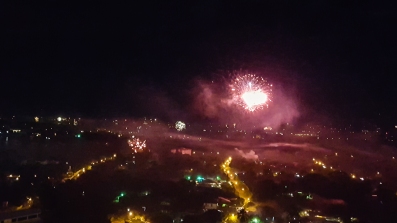 At the turn of the New Year, things changed! The whole city lit up with some very heavy-duty fireworks. This is not the small stuff you might expect but rather large professional expensive rockets. The beach in front of our apartment building was one of many launch sites throughout town that was releasing large noisy and bright displays of fireworks. We are on the 20th floor of a concrete building and you could feel the loud deafening blasts on the building. Dogs for miles started howling and most of the car alarms in the parking lots within a block or so started going off. If you panned the horizon, you would see fireworks being launched from houses all over Coronado. It went on for around 45 minutes! I don’t know how much all of this would cost but it would not be cheap!

I have seen lots of fireworks displays in my lifetime, but never a show so large, so long, and so elaborate. Well done Coronado! So next time you want something really special, keep New Years in Coronado in mind. You won’t be disappointed.

2 Responses to “A Frenzy of Fireworks”