This is the third time I have been in Panama.  Each time, we have tried, unsuccessfully, to get to the Bahai Temple.  Our first trip, five years ago, was without a GPS and we tried to navigate to it using a mickey mouse map from the car rental company and information from an outdated guide-book.  The Bahai Temple is located on top of a hill with a beautiful view of the city, valley and jungle around it.  On this trip, we could see the structure but could not figure out how to get to it.  After several attempts, each involving paying a toll on Corredor Norte, we gave up. 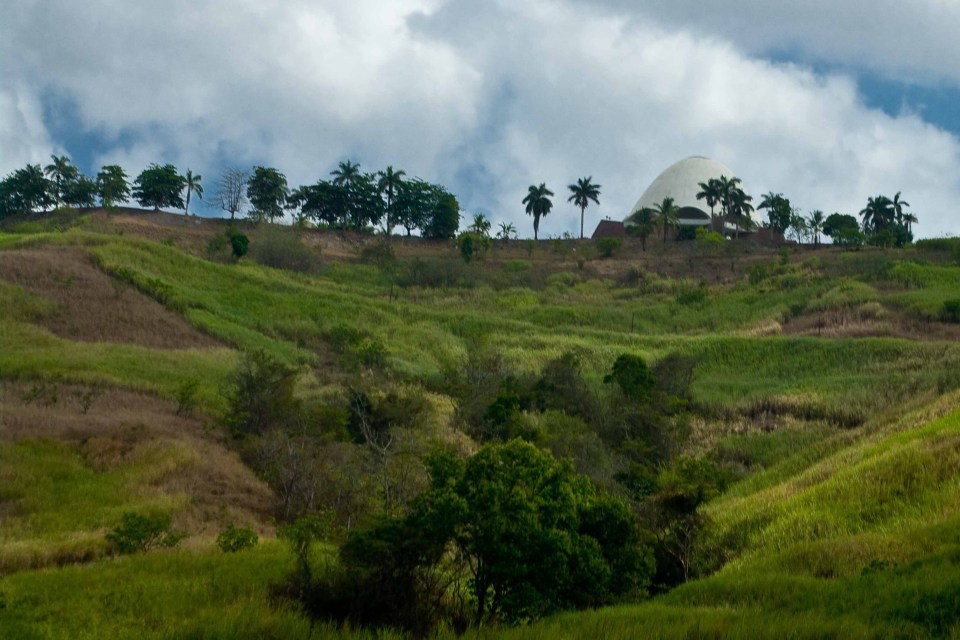 Our second trip, two years ago found us armed with a GPS that showed the temple.  We set out, following the GPS only to find massive amounts of construction in the area where we were trying to find the entrance to the temple.  Also, the GPS has a wrong co-ordinate in it so it tried to take us into a residential neighborhood in the opposite direction from where we were supposed to go.  We finally gave up but at least this time we were able to avoid paying extra tolls on Corredor Norte.

This time I checked the GPS, that had an updated map, before we set out only to find it contained the same error.  I have followed another Panamanian blog while here and they had recently posted a piece on the Bahai Temple that contained some detailed information about how to find it.  Apparently we are to look for a large black steel gate with gold filigree decoration.  Also, the signs that identify the temple access are small and close to the ground. 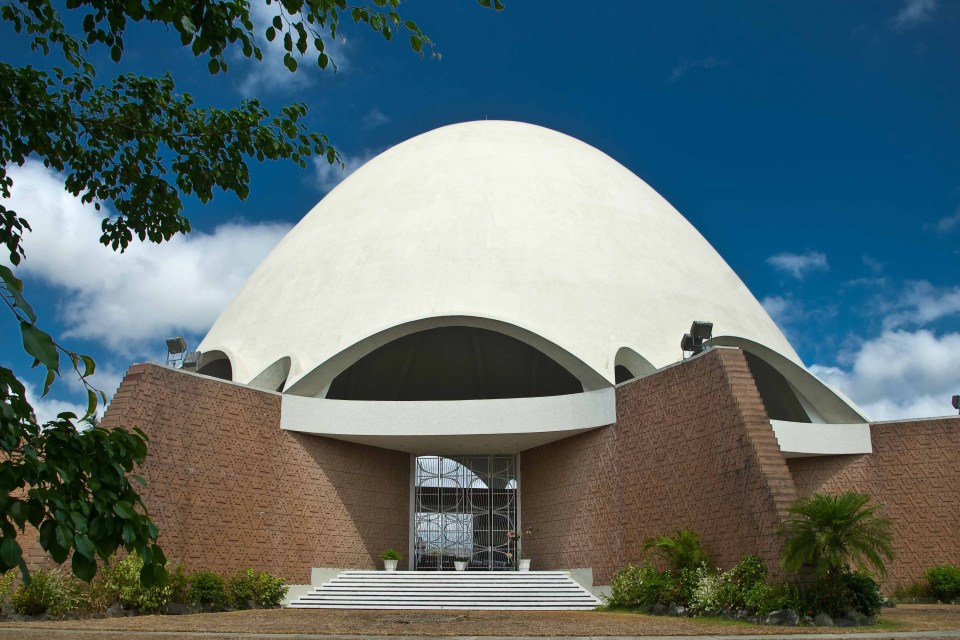 The Bahai House of Worship here in Panama is one of only eight in the world.  The Bahai laws emphasize that the spirit of the House of Worship must be a gathering place where people of all religions may worship God without denominational restrictions.  The Bahai laws also stipulate that only the holy scriptures of the Bahai Faith and other religions can be read or chanted inside in any language; while readings and prayers may be set to music by choirs, no musical instruments may be played inside.  Furthermore no sermons may be delivered, and no ritualistic ceremonies practiced. 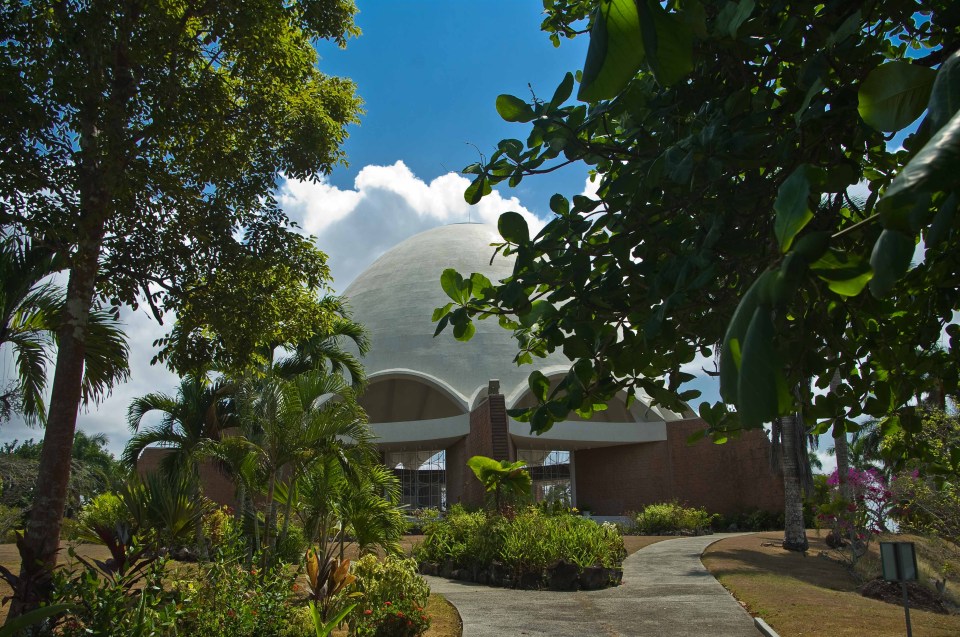 All Bahai temples share certain architectural elements, some of which are specified by Bahai scripture. It is stipulated that an essential architectural character of a House of Worship be that it requires to have a nine-sided circular shape ( Nonagon ).  While all current Bahai Houses of Worship have a dome, they are not regarded as an essential part of their architecture.  Bahai scripture also states that no pictures, statues or images may be displayed within the House of Worship and no pulpits or altars incorporated as an architectural feature (readers may stand behind simple portable lecture stands). 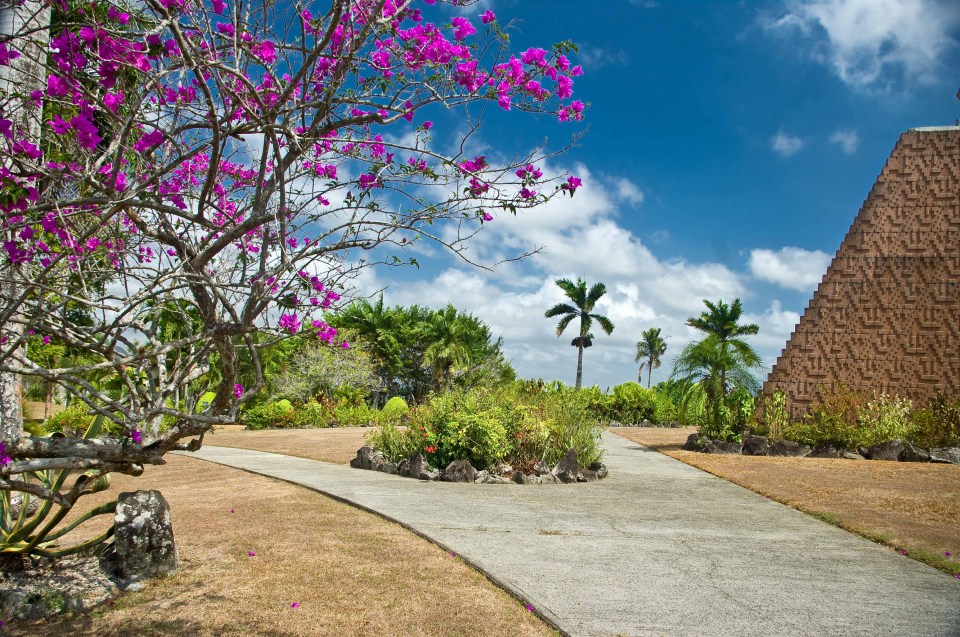 The Bahai temple in Panama City was completed 1972 and was designed by Peter Tillotson.  It serves as the mother temple of Latin America. It is perched on a high cliff, “Cerro Sonsonate” (“Singing Hill”), overlooking the city, and is constructed of local stone laid in a pattern reminiscent of Native Americanfabric designs.

The dome is covered with thousands of small oval tiles, and the entrance gates of the temple are constructed in a unique three-dimensional design each consisting of an equilateral triangle of three vertical posts with multiple rows of bars stretching between them at various angles, each row of which gradually changes from vertical to horizontal.

There is also great importance given to Panama in the Bahai writings – “You must give special attention to the Republic of Panama because at this point the East and the West are united through the Panama Canal and it is placed between two oceans: in the future it will gain most great importance.”

Also of interest to us is the use of the number nine.  There are nine sides to the building and there are nine entrances.  Each entrance has nine overhead lights.  The main entrance stairway has two sets of nine stairs each.  Nine is obviously a significant number to the Bahai believers as it was many years ago for Feng Shui in China.  While in China we learned of the importance of the number nine there as stipulated in the rules of Feng Shui.  Nine is the Emperors number and as such, doorways used by Emperors had nine decorative studs on them.  Buildings used by the emperor had nine rooms or, in the Forbidden City in Beijing, 999 rooms.  There is a curious commonality about the interest in the number nine.

Our trip to the “Egg” this time was successful!  What we didn’t understand is that the roadway up to the building is actually a narrow driveway, nestled between the SDS Storage and Turbotec businesses on Via Boyd Roosevelt.  Directly across the street from the driveway is Conway Design.  In order to use the driveway, you must be travelling southbound on Via Boyd Roosevelt.  The one lane driveway climbs steeply to the top of the “Singing Hill” and takes several minutes to navigate. 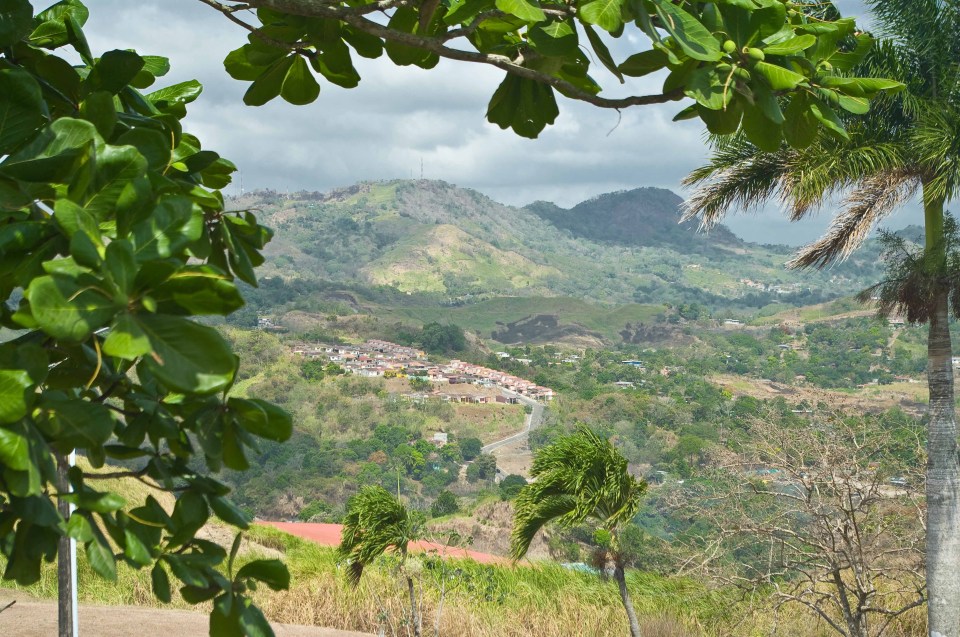 Once there, you are above the hustle and bustle of the city and there is an obvious serenity as you circle the temple, viewing the city below and vistas of the jungle and hills.  You are welcomed to enter the building, which is open and airy and has a simple shiny marble floor.  The temple is elegantly equipped with beautifully finished highly polished wooden benches.  Sit and collect your thoughts for a few moments and enjoy the breezes, silence, presence and beauty of this place before you continue on with your busy day! 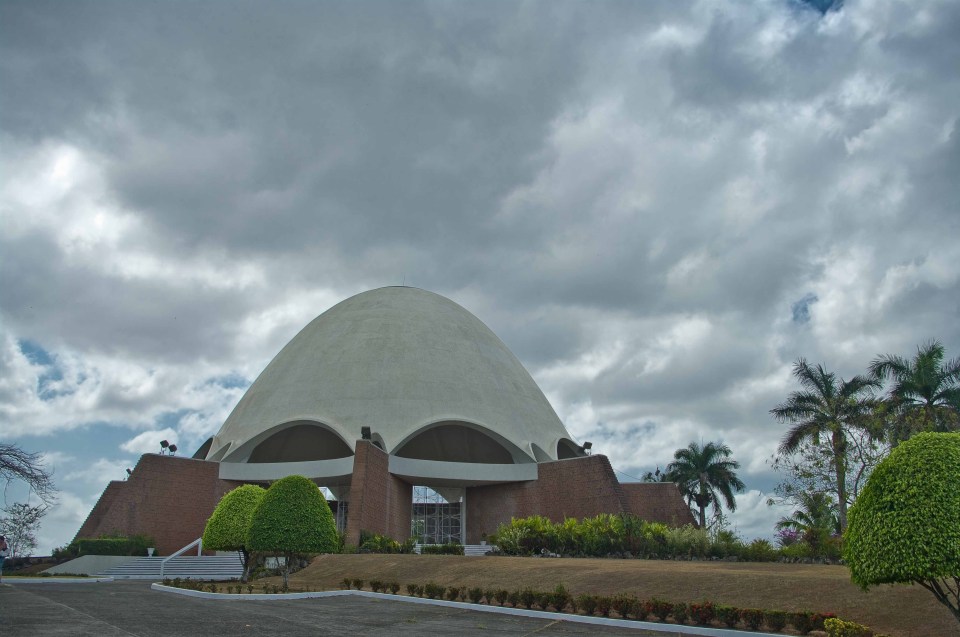