Panama is renowned for heavy traffic jambs, unpredictable drivers and decrepit vehicles.  This becomes particularly interesting during Carnival, when many of the residents of Panama City head inland to celebrate the festivities at their favorite center.  Every Carnival, the City gets a practical exercise in evacuation!  The traffic out of the city is bumper to tailgate, often as far inland as Coronado, which is normally over an hour drive at the best of times.  Complicate this with breakdowns that may or may not pull off the traveling lane of the highway.  And then there are the accidents.  When they happen they seem to be bad ones.  In our short time here we have encountered a number of them; all pretty ugly.  Trucks pulling container chassis that lose their containers on a curve, cars rolling over on straight stretches of the highway and stuff that just seems to run off the road for some reason.  One day we met seven ambulances coming toward us from the other direction.  Eventually we found a bus, on our side of the road, with the front end caved in and the windshield on the passenger side pushed out.  The accident is one thing but then you should see the extra chaos caused by recovery operations that happen right in the middle of an extremely busy highway with nothing slowing down.  On the positive side, traffic here does seem to pay better attention to emergency vehicles than at home.  When ambulances are trying to make their way through busy traffic to an accident, each lane of traffic just moves a bit further apart to allow the emergency vehicle to pass between them as if in a third lane.

In 1990, Panama became the second Latin American country (Costa Rica is the other) to abolish their military in favor of an arrangement with the Americans.  Panama re organized their military forces into a group of forces called the Panamanian Public Forces (PPF).  The PPF includes the National Border Service, National Police, National Maritime Service, Judicial and Technical Police (PTJ) for investigatory activities, National Air Service, and an armed Institutional Protection Service or SPI for protection of public buildings. The PPF is also capable of performing limited military duties.  On occasions like Carnival, many of these organizations come together to aid in keeping the traffic moving.

As we drove the opposite direction from the Carnival traffic, in empty traffic lanes, we could see the practicality of how the country handles this situation.  First, every high traffic entrance to a small town or commercial center is coned off to prevent left turns into the area or out of the area where a lane of traffic would have to be crossed.  Also, every two kilometers there was a uniformed police person (of some kind) standing at the side of the road.  Most of them with a motorcycle or car.  They park the bike or car so they are able to be seen by the passing traffic so there is a highly visible police presence.  As we drove toward town, there was a place where a couple of the two kilometer spots were empty.  We looked for a doughnut shop but as we went a bit further, we found those police at an accident site.  This system ensures the quickest response to problems by drawing the closest couple of members from either side of the incident.  It works well!

Even when traffic is at normal levels, there is a high police presence maintained on the Pan-American.  Every few kilometers you will find a police person, usually with a motorcycle, and a radar gun, checking traffic.  They don’t hide, like at home, they are out in the open and a single member will be checking both directions of traffic.  As we were told, you can expect to show your driver’s license and passport and then you will be shown the back of the radar gun with the measured speed.  Bribes don’t work very well any more since the current government has stepped up its anti corruption activities and police can lose their jobs if someone complains about having to pay a bribe. 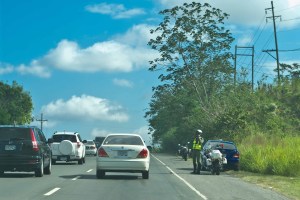 We have also noticed an increased number of police checks this trip.  Police will have a check stop set up on the highway where they work in pairs.  One enters some information from driver’s licenses into a cell phone app while the other nurses an automatic weapon or shotgun while carefully watching the occupants of the car.  If you are wanted they get you!

All in all, the way the police give such a visible presence here and check on vehicles from time to time makes for a high safety comfort level for anyone who might be a little nervous about safety here in Panama.