Today we decided to take advantage of a circumstance that doesn’t happen often here:  no traffic!  With Carnival in full swing and much of the city partying inland somewhere, it’s a great time to check out Panama City.  We headed downtown, being careful to avoid the end of town where the Panama City Carnival festivities happen because all the streets are closed and you have to follow some pretty creative detours to get places.

We decided to poke around the Punta Paitilla area of downtown Panama City.  It is a well to do neighborhood where the Trump Tower is along with a number of other huge residential towers.  On the way, we pass a very unusual and distinctive building in the skyline.  The locals call it the screw and it looks just like it.  I’m not sure how new it is but I don’t remember it from previous trips. 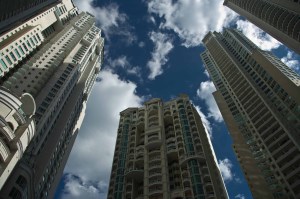 The buildings in Punta Paitilla are arranged in a kind of circle.  Each has it’s own distinctive shape and style.  All are well-kept residential towers.  We headed into the Trump Tower for a walk around.  We walked around the small mall on the lobby level and out to the back of the building, or water side to be more accurate, where there is a large deck and a restaurant.  The views are great and there is a constant cool breeze coming off the Pacific. 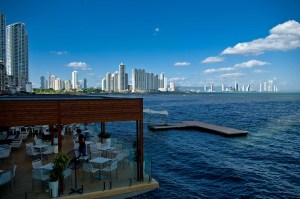 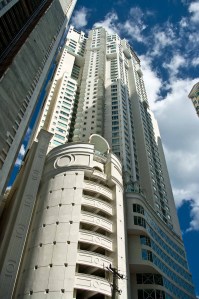 We heard that there were a couple of other restaurants in the building and after asking for directions, and making a round trip on the elevator which was the wrong one, we got on the right elevator and pressed the correct button and got to the restaurants.  There are two high-end restaurants, both of which would probably be fine but we were not ready to eat so just had a look.  I managed to figure out how to get outside, as there appeared to be a deck around the building.  As we made our way around the building we came across two small pools on different sides of the building.  I believe we were on the 14th floor or there about.  One of the pools was an infinity pool with a beautiful view down the coast towards the airport.

The views between the buildings are sometimes quite interesting.  Looking down the street, from the outside deck of the Trump Tower on the 14th floor, a banking complex is framed by two other towers closer to the Trump Tower.  It makes an interesting image.