Today, 16 October, we arrived in Puerto Quetzal, Guatemala. On arrival, the weather was cloudy and rainy but it improved throughout the day. Our run from Huatulco was slightly rough, as expected, but nothing too problematic given the warning from the captain. We arrived at 10AM.

Guatemala has been on the “to do” list for some time now and I am looking forward to getting a small snapshot today so I can decide if further investigation is warranted. Guatemala’s main exports are sugar and coffee and there are a number of volcanos in the area, some of which are active.

We entered a small freight port, through a narrow channel as two tugs stood by to aid our huge ship if needed. Several ships were busy loading or unloading cargo. A row of seemingly abandoned heavily corroded ocean-going fishing boats was together in a back corner of the harbor.

From the ship, our dock appeared very small, with a narrow railed walkway to a large palapa structure. Staff from the area all seemed to come out to view the arrival of the Westerdam. As we came ashore and walked the narrow walkway toward our tour bus, there was an elaborate welcome under way in the palapa, with a band playing Guatemalan music. There is a large new market area full of colorful local curios, which everyone must pass through to clear the port. 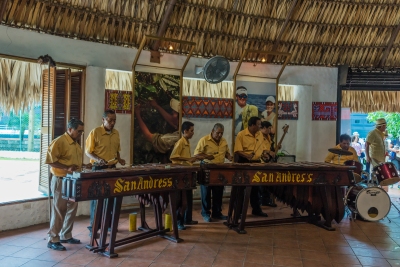 Guatemala has a growing tourism industry and cruise ships sure can add to it quickly. Today 1,170 people have purchased tours to see various aspects of Guatemala and we are the first ship of the season to arrive here. There will be 78 more cruise ship visits by the end of the season. As the convoy of busses leaves the dock area, people along the way stop whatever they are doing and wave to the busses. They know this is good for their economy!

One of my interests here is an old Spanish colonial city called Antigua, which dates back to the early 16th century. Built 1,500 m above sea level, in an earthquake-prone region, it was largely destroyed by an earthquake in 1773 but its principal monuments are still preserved as ruins. Today Antigua is a UNESCO World Heritage Site. The pattern of straight lines established by the grid of north-south and east-west streets and inspired by the Italian Renaissance, is one of the best examples in Latin American town planning and all that remains of the 16th-century city. Current construction here requires builders to build in the colonial style to maintain the beauty of the city and new wiring must be put underground.

We drove 90 minutes in a Toyota Coaster bus in a very cramped seat, to get there. As we arrived, the weather improved and the sun appeared. The 1,500 m elevation made for a cool comfortable atmosphere. Today, the population of Antigua is around 20,000. We arrived at a typical Spanish square, where the church faces west, the city hall faces south, and shops face east. The descendants of Antigua are Mayan so the square was full of Mayan women dressed in historical costumes, trying to sell to tourists. They are quite persistent, but that is the local culture. On the surface, it seems that these people are very poor but if you get talking to them, and they smile, you will see that most have a mouth full of gold. The dentists in Antigua have done a lot of work and it is beautiful work, indeed!

The area around the square has good-looking restaurants and many of them have English on their signs. There are decent looking hotels available as well. I think Antigua will be on the future exploration list.

We arrived back at our ship on time, but several of the tours were late… beyond the sailing time! If you are on a Holland America tour, they will hold the ship for the tour to arrive back. This is a nice benefit of using HAL tours. If you were on your own, you would be looking for the airport to get to the next port to rejoin the ship. Tomorrow we will be in Nicaragua.