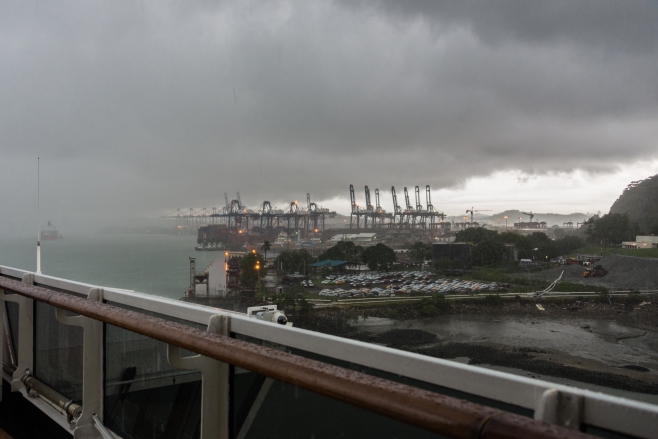 Today we transit the Panama Canal! The canal is an amazing feat of persistence, determination and engineering and it is 100 years old this year. I do not know of too many things that are being fully used today, just as they were built, 100 years ago, but that is the case with the Panama Canal lock system.

Most people think of the canal as running east and west but it actually runs North West from the Pacific to the Atlantic oceans.

When you transit the canal, you enter locks off either ocean and are lifted up about 26 meters to an artificial lake created out of the Chagres River, called Lake Gatun. You cross Lake Gatun and are lowered through another set of locks, back to sea level. Simple, right? Well, it sounds that way but when you consider some of the thing that have to be done to make this happen it boggles the mind.

Without Gatun Lake’s fresh water, the Panama Canal would not be possible. An average rainy season (from May to November) will result in around 330 cm (130 inches) of rain. Not all ships in the world fit through the Panama Canal. The current greatest length is 965 feet with 107 feet of width being the most. Ships built this size or smaller are called Panamax ships. Our ship is 936 feet long and 103 feet wide. The captain says they will need to get the grease out to get the Westerdam through the canal.

Our Westerdam paid around US$375,000 for the transit. The toll is set based on the vessel type, size, and the type of cargo carried. Passenger vessels in excess of 30,000 tons known popularly as cruise ships pay a rate based on the number of berths, that is , the number of passengers that can be accommodated in permanent beds. There is also a reservation fee of about US$35,000 to ensure your ship gets to the canal prior to the transit start.

Our transit of the canal is from the Pacific to the Atlantic Ocean or North West. The schedule for our day is as follows:

05:30 – Pilot on board – A pilot is present throughout the transit. The ship passes through the canal using its own power.

06:30 – Passing the Bridge of Americas – This bridge was the only way to cross the canal when it was built. Today, there is a second bridge called the Centennial Bridge, which is further north on the canal.

07:30 – Arrive Miraflores Locks – The canal visitor center is located here. It is a large building with viewing areas, restaurants, and the canal museum is located here. There is a bank of bleachers set up for visitors to watch ships going through the Miraflores locks. A narration will give you all kinds of information about the transiting vessel. 09:25 – Arrive Pedro Miguel Locks – This set of locks passes you through an elevation change between two lakes that make up the canal.

11:25 – Pass Gamboa – Gamboa is where the dredging and maintenance divisions for the canal are based. Four dredges work full time to keep the canal open. There is a prison on the canal just before Gamboa where former Dictator Manuel Antonio Noriega Moreno, remains incarcerated after serving time in the USA and France.

13:25 – Arrive Gatun Locks – These are the last locks in the canal, on the Colon or north end of the transit.

You can see that a full transit through the canal is an all-day undertaking for a large ship such as the Westerdam. Our schedule took a one-hour delay right at the start, due to traffic problems at Miraflores locks, but the schedule held pretty well for the balance of the transit.

As we started our trip through the canal, the weather was poor with heavy rain from the Miraflores locks through the Centennial Bridge. It brightened up for part of the afternoon but deteriorated as we ended the transit and passed Colon. Oh well, it is the height of the rainy season!

Our captain is Captain Rens Van Erten, a Dutchman (as are all the Holland American captains) with lots of canal experience. He kept us well informed of our progress and there was an interesting narration throughout the day by the ship’s Location Guide, as we progressed through the transit.

The bow of the ship has been closed to passengers throughout the voyage so far but it was open today and they served coffee and Panama rolls in the rain. They also had the front access open on decks five, six and seven, which provided a good access for photography.

Yesterday, they announced that there are webcams at the Miraflores and Gatun locks and that people at home can view the transit at http://www.pancanal.com/eng/photo/camera-java.html?cam=MirafloresHi. Too bad the rain was so heavy and our time was out by an hour. 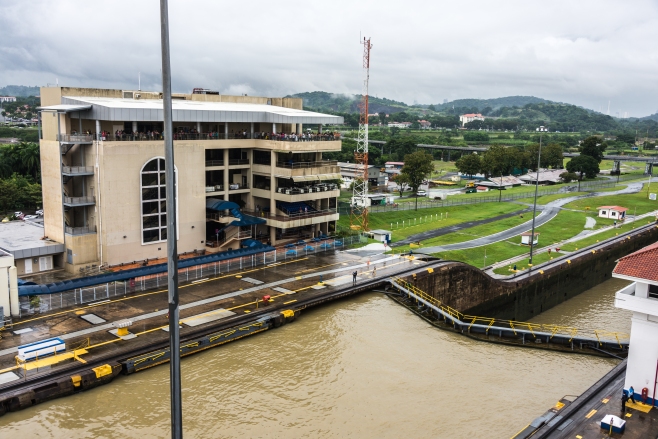 The photo department was able to leave the ship at Miraflores, to do some photography of the ship passing through the locks. They managed a bow shot of the ship, with everyone waving, among other things. They were off the ship all the way through to Colon, where they re-joined the ship by the boat that came to collect the pilot. The transit ran smoothly, other than a small bump as we stopped in one of the locks. I have a picture of the scratch on the side of the ship that I took in the next port; to prove we hit the canal. According to the captain, it is a common thing to have happen. He said he had lots of paint and we would not see any evidence of the bump in a few days.

You probably know that there are new locks under construction, which will allow the largest of the large ships to be able to use the Panama Canal. Initially the plan was to open the new locks this year to coincide with the 100th anniversary of the canal but there have been delays and a fight between the Italian general contractor and the Panamanian government. Work stopped for a time over a dispute about financial overages on the fixed price contract. The dispute has been resolved and work is under way again. Currently, progress on the new locks is at 80% complete. The huge lock gates were recently delivered from Europe and are standing by the side of the canal awaiting installation. They are so large that only six at a time would fit on a ship. 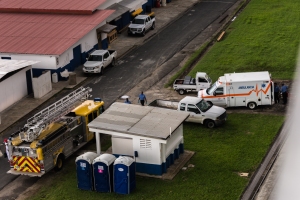 As we ended our day on the canal, we were reminded once again of the difficulties experienced by older passengers. As the ship descended the last lock, the water flow stopped while an ambulance came along side of the ship to remove another ailing passenger. A delay of around ten minutes was all it took to transfer the patient and then the descent of our huge ship continued and we exited the canal.

This concluded a very interesting day and allowed me to check another item off my bucket list! We are in Cartagena, Columbia tomorrow.