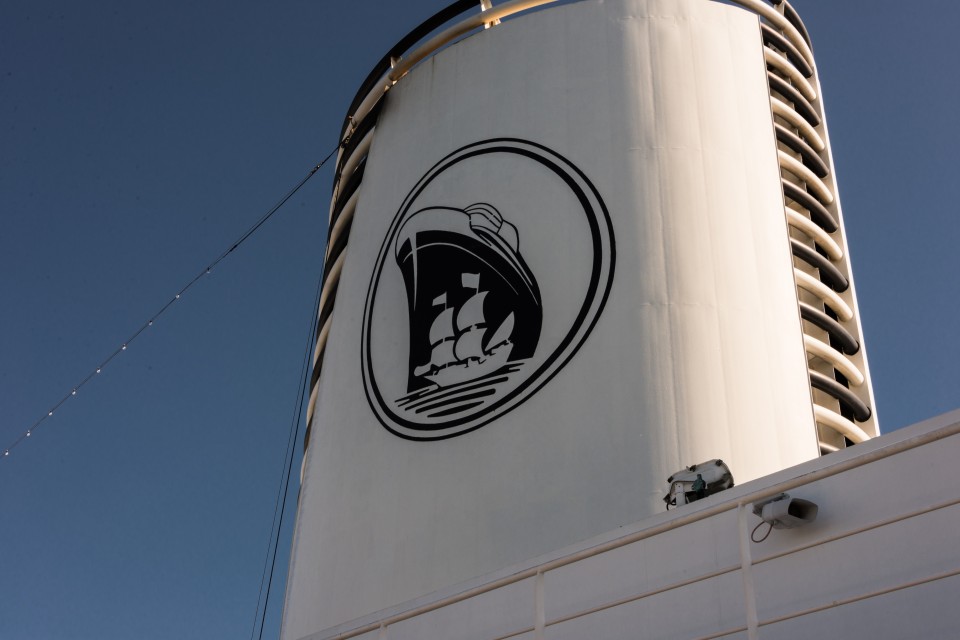 Today is Cruise departure day, 10 October. It is also my birthday so I am hoping for an uneventful day in our new digs and for the next 15 days.

Our hotel runs a shuttle to the cruise ship dock which takes around 15 minutes. The departure dock is right in the middle of downtown San Diego. It was a great boarding. With 2,125 passengers booked on this cruise, I was expecting some back up but it was almost as if we were on our own. We turned in our checked luggage and walked right up to the check-in desk which we cleared in around five minutes and walked right up the gangway to the Holland America Westerdam. The crew is Indonesian and Filipino as all the Holland American ship crews are.

We were greeted as we entered the ship and were told that our cabins were not yet ready so to please go up to the Lido deck restaurant for lunch. This restaurant is cafeteria style service. I am traveling with my brother on this cruise and he is a cruiseaholic. He knows more about Holland America and their ships than most people would ever care to know. He told me to wait as he went to check on a couple of things. He returned shortly to announce the full service restaurant was open and our cabins were ready! It is handy to have someone around who knows the ropes.

We had a great lunch and a leisurely afternoon until our departure at five, when a large departure sail away party began on the rear outside of deck nine. Drinks, a band, and a beautiful view of sunny San Diego growing smaller in the distance culminating in a perfectly served dinner in the Vista Dining Room, all provided a great start to what I am expecting to be an overly opulent fifteen day voyage of pampering and over indulgences down the west coast of North America, through the Panama Canal, and eventually ending in Ft Lauderdale. Here are a few shots from around the ship. We have selected open seating in the dining room, for this cruise. It gives us a great chance to meet other travellers. There are 22 different countries represented on this cruise.

Part way through our first dinner, a cake with lit candles arrived at our table of 16 and the waiters asked for me. They then sang an Indonesian birthday song. Most embarrassing, I must say!! I blamed my brother as he was the only person I could think of who knew it was my birthday, but he swore it wasn’t him! Later I found out that the ship, having all the passport information, mines it for birthdays. Also, when you check in for dinner, they take your room number so they know you are in the dining room and what table you are at. There is no escape! I think this nefarious system must have been developed by the CIA.

This is my second cruise with Holland America and this ship carries about 800 more passengers than were on my first. I was concerned about volume back-ups but everything seems to be scaled well and the extra people are not really that noticeable. Everything is larger than the first ship. This ship was christened in April 2004 in Venice Italy. Westerdam is equipped with a CODAG power plant and an Azipod propulsion system, which gives it amazing maneuverability and the ability to stop from 20 knots in three ship lengths. (The captain says he would be in big trouble with the engineering officer if he ever did that) The $500 million dollar Westerdam can even spin on the spot, which is very cool for a ship that is 1.6 kilometers around the outside deck.

I did a little checking and found that this is the third Westerdam. The first sailed for Holland America Line from 1946 to 1965. It was a combined cargo/passenger ship with accommodations for 143 first-class passengers. While being constructed during World War II, this ship was sunk three times before making its maiden voyage. It was bombed and sunk by Allied forces on August 27, 1942 in the shipyard in Rotterdam. The Germans raised the ship in September 1944, but it was quickly sunk by the Dutch underground forces. After being raised a second time, the resistance again sank it on January 17, 1945. The ship was finally completed and went on to be a regular on the transatlantic run making two eight-day crossings each month between Rotterdam and New York. She ended her career on February 4, 1965 when she was sold to Spain as scrap.

Clearly the Westerdam name has a fascinating history and lots of experience, much of it quite troublesome. I hope they have the trouble part corrected by now!

The design of our itinerary is great, with two sea days right away, as we sail to our first port of call, Puerto Vallarta Mexico. This provides a couple of days to get familiar with the layout of the ship and where things are. We arrive in Puerto Vallarta on Monday the 13th at about Seven I the morning.

Today, we took a kitchen tour. This is a pretty impressive operation with 125 kitchen staff and around 150 serving staff delivering 12,000 meals per day to several restaurants around the ship and also room service. I have never seen so much stainless steel in one place. (The pastry spider web is especially for Andrea!)

Of course, there is always the two shows in the ship’s theater, which seats 900, at 8:00 and 10:00 each night. They have a variety of great entertainers that put on quality shows each night. Last night was a great comedian and impressionist who had lots of cruise ship humor. It was nice to see a performance that was not full of four letter words! Here are a few shots from tonight’s show.

We have a half day shore excursion booked for Puerto Vallarta tomorrow, but I still hope to be able to find an Internet café close to the ship, where I can post this. The Internet connection on the ship is just too slow and costly. I did a trial run to send a single small pre written email. It cost $8.50.

Holland America are adapting their ships to take on shore power while they are in port. This will allow them to shut down the engines and meet their quite aggressive green targets. Maybe they could look for a high speed Internet shore feed as well. Most people just don’t understand the costs and speed issues associated with satellite Internet connections.

Today, the captain was asked who was running the ship while he was making a welcome speech at lunch. He responded that the ship was being run by Windows 7. I’m glad he didn’t tell us it was Windows 8.1!