On Monday, we were off to Colon to catch the new overnight ferry to Cartagena, Columbia. A relatively short one-hour drive took us to the cruise ship facility in Colon, called Colon 2000, where we found the new Ferry Xpress ro-ro ship MS SNAV Adriatico waiting to take us to Cartagena.

We milled around the cruise ship terminal trying to figure out what was happening and where to go. We figured out how to get a parking permit for the nine days our car would stay in the secure parking area and then settled in to wait for the ticket wickets to open. The ferry, scheduled to leave Colon each Monday and Wednesday at Seven PM, arrives the next day at about one PM. Our instructions were clear! We must be at the terminal by four PM the day of the sailing and we had arrived just after three.

Just before five PM, a public announcement was made, advising everyone that the ferry would not be sailing that night due to a storm that was directly on our course and that the Captain had determined that it would not be safe. Now this is a serious decision to take, however proper, as the ferry schedule calls for a return voyage from Cartagena on Tuesday evening and the ship would not be there to make the trip. Hundreds of people would be inconvenienced by the decision!

One passenger was trying to round up support to approach the ticket agents with a demand to go anyways, because, after all, it was a large ship and it would be OK! The Captain didn’t know what he was talking about. Another was heard to say that the ship had been damaged on the last trip and that they were just afraid to tell the passengers. Now there were people that “had” to get to Cartagena for a wedding and others who needed to travel but did not have the money for an airline ticket, which by the way carries an insane price of well over $US 600.00 for a one hour flight. Still others complained that they did not have the cost of a hotel for the two days they would have to wait for the next ferry. Eventually everyone broke out in applause, which we later found out was for the senior manager who had just arrived from head office, to aid the two ticket agents trying to handle the developing chaos! Police presence increased… just in case!

Next, we found out that they would open the ship to passengers, who could sleep onboard and would get meal vouchers redeemable at some of the local restaurants! I thought that was an exceptionally generous move given that the delay was weather related.

This whole situation caused us to reflect on how lucky we were to have the means to be able to rearrange our travel while others could not afford either a low cost hotel or food for two days.

This morning we went downtown to the Ferry Xpress office to adjust our tickets to travel to Cartagena on Wednesday, this week and return on Thursday, next week. In the process, we discovered that we had been upgraded, at no cost, from an inside cabin to an outside cabin for both trips. After a glass of wine, our vacation was salvaged! 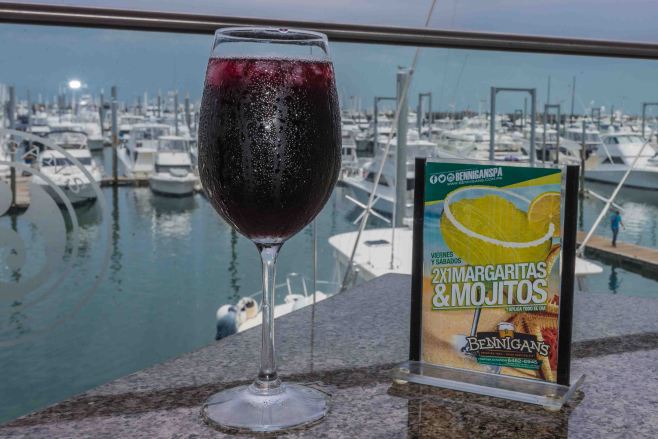 4 Responses to “The Not So Ferry Xpress”