Sadly, today we leave this beautiful place and head for our next destination which is at the beach in Gorgona and is about a three-hour drive without stops.  After another great breakfast, we packed up and hit the road. 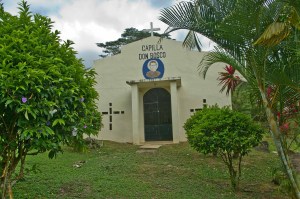 Yesterday, I mentioned a blockade of the Pan-American, west of here closer to David.  It turns out that the local Indians (Ngobe-Bugle) had blocked westbound traffic on the highway for several days.  They were protesting the changing of some legislation around mining and the Cerro Colorado mine, which has one of the largest copper reserves in Latin America.  There have also been some short-term interruptions to traffic eastbound headed for Panama City.  The westbound blockade has held the second largest city in the country, David, hostage and there are reports of stores being short of food stuffs and fuel stations closing as they are out of fuel.  The police were directed to clear the road last night and the ensuing scuffle resulted in a number of injuries and one death.  Several police were hospitalized.  Further investigation into the death found that the bullet was of a caliber not used by the police.

President Ricardo Martinelli has blamed the opposition and “foreign elements” for inciting chaos.  I did a little Internet research and oddly found that an Indian band in Ecuador held a protest at the same time over a similar issue.  When you look at the pictures of the Panama protest, I cannot help but draw the conclusion that this was organized by someone or group other than the natives that knows the techniques of how to successfully protest today.

Now our friend Octav that left Santa Fé a couple of days ago, was headed to Boquete.  He took the bus from Santa Fé to Santiago where he found out busses were not running due to the blockade.  He had some quick scrambling to do but managed to secure a place back at the Bayview Hotel in Santa Clara, the other direction.  As it is on our way, we decided we will stop and see how he is doing. 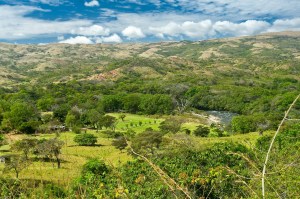 We have only been in Santa Fé for a few days and most of that time was spent at the Casa Mariposa Boutique Hotel.  Our top 10 impressions of Santa Fé are:

1.  Book a few days here at the Casa Mariposa.  You won’t believe the experience.  See the link at the bottom of the right column under Businesses We Support;

2.  Don’t miss the “Lunch with the Toucans” at the Mariposa. You will love it;

3.  Be sure to top up your gas tank in Santiago before leaving for Santa Fé. There are no fuel stations in Santa Fé;

4.  Santa Fé is a hilly mountain frontier town, full of friendly locals, around 3,000 of them;

5.  This area is starting to develop, thanks to publications like International Living Magazine.  There is a growing expat community and people from all over the world are starting to settle here;

6.  There is lots of hiking and things to keep you busy in the area;

7.  Check out the Santa Fé National Park.  If you are a birder, your hotel can help you pick up an inexpensive guide to make sure you get to see what you want;

8.  Expect the place to be a bit remote.  There are only cell phones and a high-speed internet connection is still in the future;

9.  On the way to Santa Fé, don’t miss stopping to see the restored old church in San Francisco.  It dates back to 1621; and

10. Be open to all the rugged natural beauty and incredible variety of birds that you will find here. 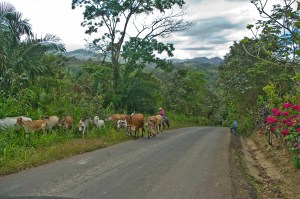 The trip back to Santiago takes us through Santa Fé and the rolling hills as we proceed southbound back to the Pan-American. Along the way we met a herd of cattle being driven right up the road to us. The guys were friendly and waved as they forced the cattle off the road on the far side to allow us through. One of my favorite pictures so far is this one of the rider on his horse climbing the hill after crossing the bridge. It really kind of describes the character of this area; slow, casual and laid back. 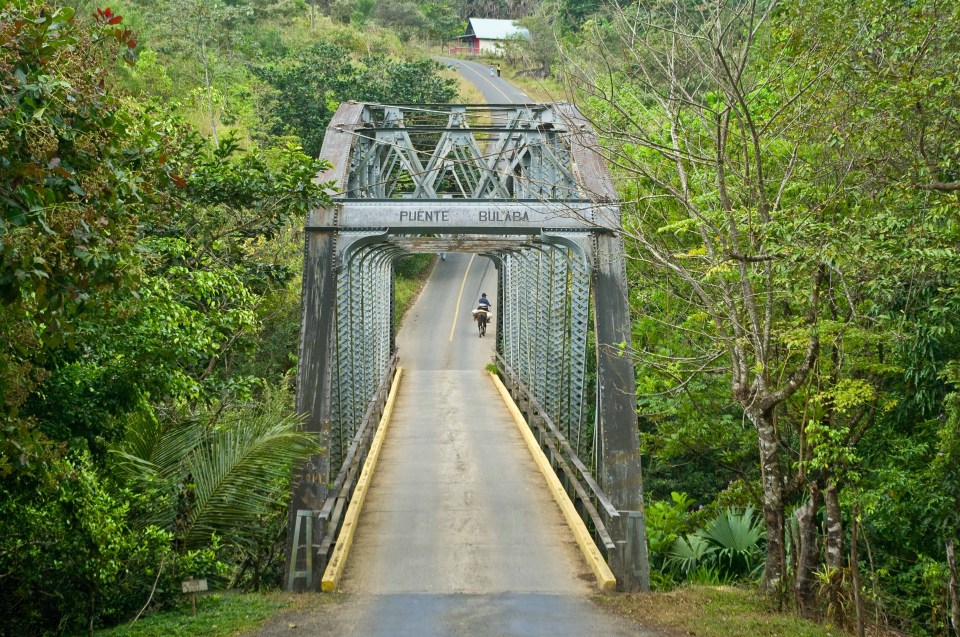 Further down the road, we spotted a hawk flying beside us.  We went around a corner and Andrea said the hawk had landed and was standing beside a blue bag on the road behind us.  I grabbed my long lens and got out of the car as quietly as I could.  This is a Yellow-headed Caracara, a beautifully marked bird.  He was very cooperative.  He posed on the road for a bit then took off away from me and circled back.  I think the markings on this bird are magnificent!

After negotiating Santiago we were again eastbound on the Pan-American, headed for the Bayview.  Watermelon is now in season and it is starting to show up in markets and roadside fruit stands.  We stopped at this place to stock up on some fruit for our next week and bought one cantaloupe for $1.50, three pineapples for $1 and a good-sized watermelon for $3. 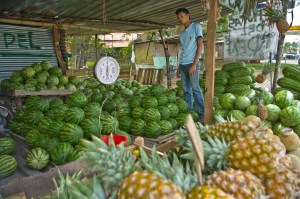 We found him on the deck of the Bayview, entertaining a couple of young women from the US!  Octav wasn’t expecting to see us but was glad we stopped by to visit with him on the way to Gorgona.  We made plans to get together over the next couple of days for dinner and a visit then were off to Gorgona to find our new home, Sueno Mar, which means sunny beach. 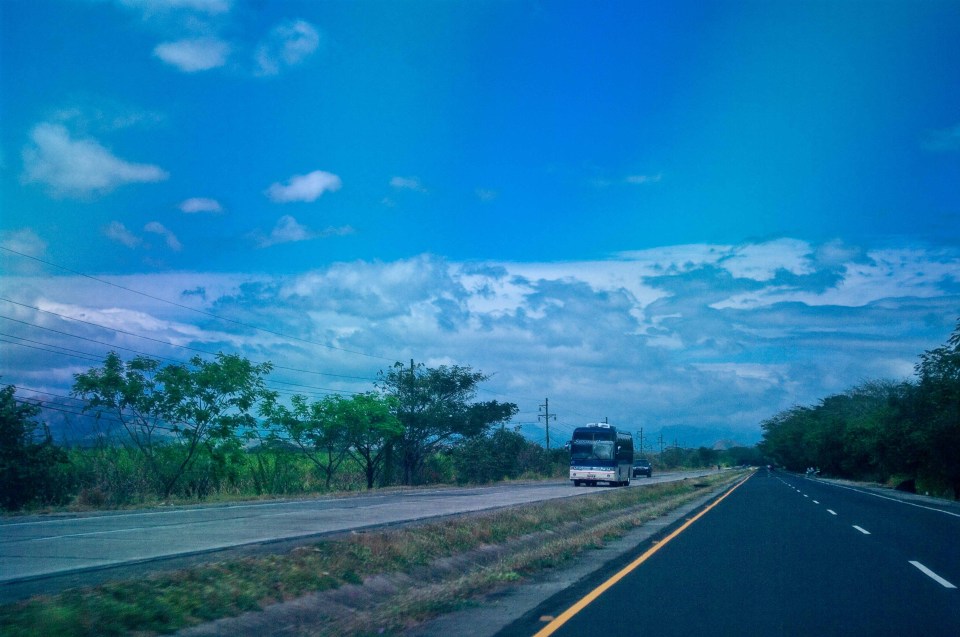 4 Responses to “Impressions of Santa Fe”