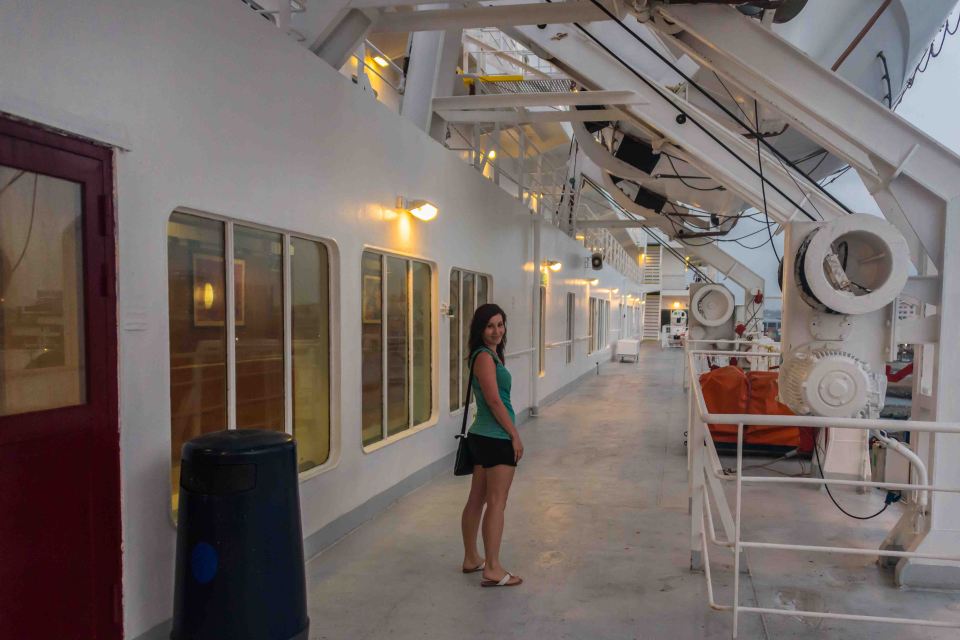 On Wednesday, the three intrepid travellers set out for Colon to attempt the second boarding of the new overnight RoRo Ferry Xpress service from Colon to Cartagena. This time, they started processing passengers for boarding around 5:00 PM for a 7:00 PM scheduled departure.

The mandatory process takes each person through several steps to gain access to the ship. First, you go to a wicket and show your ticket to receive a boarding pass that, in our case, contained our upgraded cabin number. I was surprised to learn that I was considered a “Bambino” on the boarding pass as I guess my Pensionado discount gave me the kids fare. Next, we moved on to the immigration lines where passports were slowly checked and eventually stamped. This was followed by the security step where all luggage was scanned and you walked through the metal scanner. We were now permitted to board the ship after ducking the ship’s photographer who was trying to capture images just outside the terminal door. The ship’s crew conducted the last step once we came off the gangplank and entered the ship on one of the car decks. They simply checked boarding passes and directed us to a couple of miniature elevators that took us to the sixth deck where we were emptied out into the lobby. 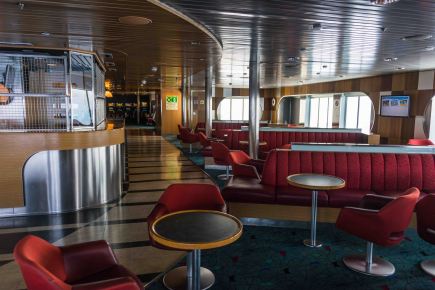 Now, this ship is not as luxurious as a cruise ship but it is neat, clean, and quite large, with three of the total of nine decks being for autos. The name on the side of the ship and on the funnel is SNAV Adriatico. Its home port is Napoli, Italy and the crew is Italian. It sails under the Italian flag. Built in 1986 in the Netherlands, it carries 1,200 passengers and 524 autos. Stena RoRo Navigation Ltd., based in Limassol Cyprus, owns it and it is under charter to SNAV S.p.A., Italy who leased it to Ferry Xpress Panama in October 2014 to run Colon – Cartagena – Colon and Colon – Bocas del Toro – Colon routes. Our partially obstructed view outside cabin was located on the sixth deck and was configured like a train cabin for four. Two lower beds and two-fold down uppers separated by an ample walkway, along with a compact head with sink and shower were ours until the next afternoon.

Our exploration of the ship revealed an outside palapa bar at the rear of the ninth deck where we settled to watch the departure with a very nice cold beverage. What with it being an Italian ship sailing out of Panama, the departure was not on time but we were in no rush! 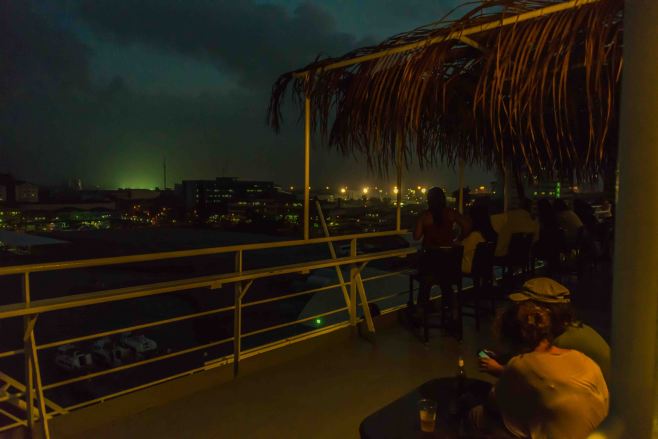 Investigating the other areas of the ship, we found deck six contained the lobby and photo store. Deck seven was the food deck with a coffee bar, small cafeteria with a screened off area for full service, a large cafeteria restaurant used for breakfast, and a very nice high-end oriental restaurant. Deck eight contained a duty-free store, a casino consisting of slot machines, disco, and a small massage operation. We headed to the sixth deck restaurant screened off from the small cafeteria and had a nice leisurely dinner. The food was well prepared, delivered promptly, and the attentive servers spoke enough English for us to get by. Very nice!!   Our passenger load would be estimated at around 300 people, many being back packers and local Panamanians or Colombians looking for less expensive fares than the $600 to $700 airfares we found online. There were a group of bikers on board but really not much in the car department. Fares are as low as $99.00 for a coach seat and around $300 for an automobile. Cabins run from $300 and up. The majority of the passengers were using seat accommodation so I would wonder about the practicality of the large variety of restaurants. Other than the odd tourist housed in a cabin, I do not think many would be using the restaurants. The bars did seem to be a bit busier, but not much. Andrea was the only casino visitor we saw until they started giving out free $2 coupons for the slots.

The trip was enjoyable, though a bit rough.

While checking out at the end of the voyage on Thursday, we said, “See you next Thursday” to the front desk clerk, who corrected us saying “We were just advised… that voyage for next Thursday has been cancelled…”. 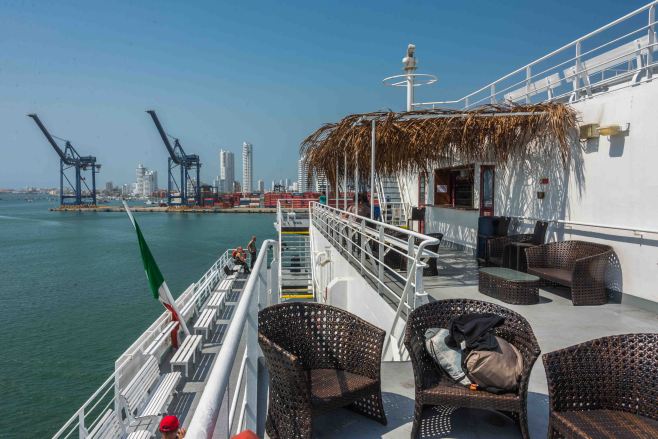 5 Responses to “Finally, the Ferry Xpress to Cartagena”